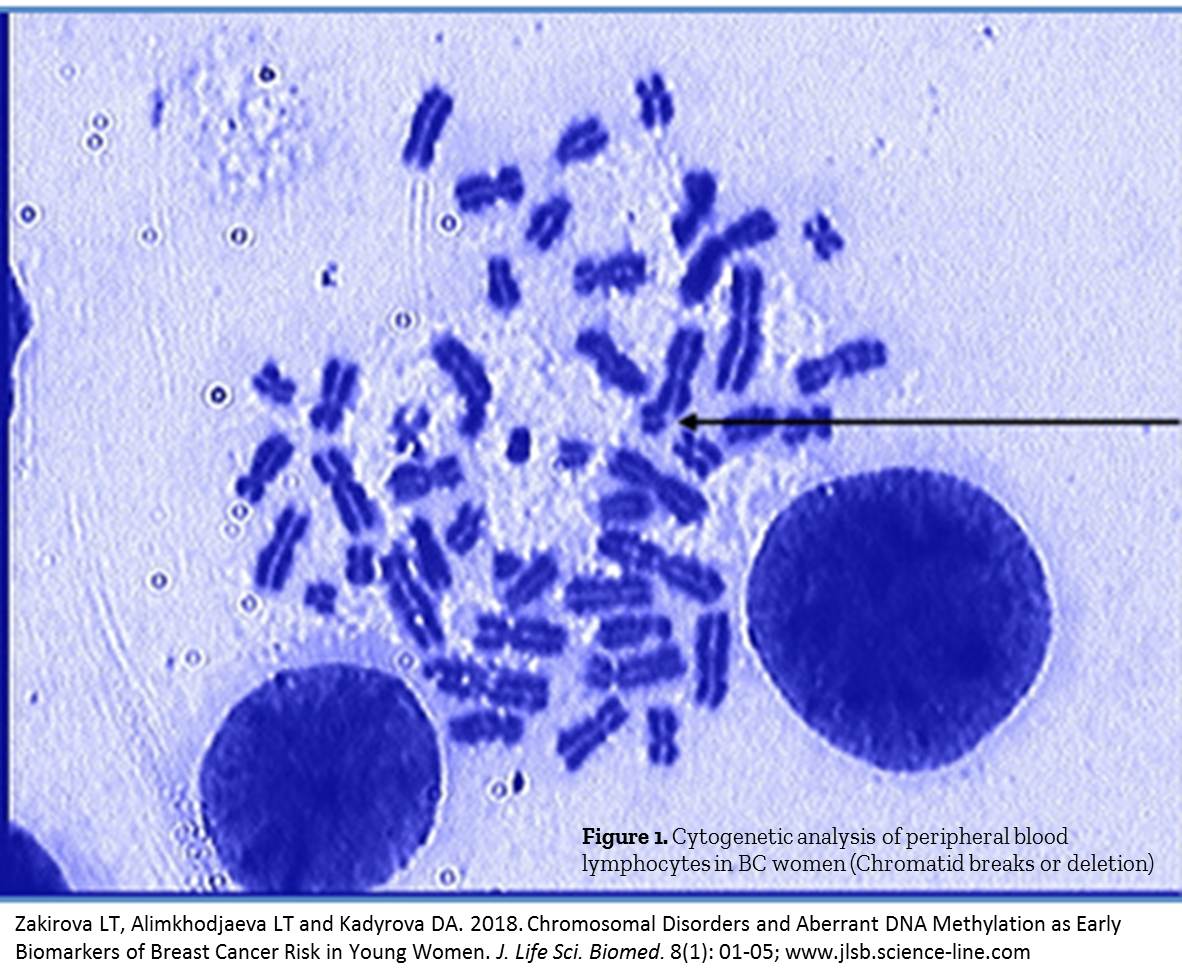 Abstract
Genetic instability is an early and constant characteristic of tumor cells. Chromosomal aberrations and epigenetic anomalies are the factors leading to genomic instability. This study aimed to investigate the relationship between chromosomal disorders and aberrant DNA methylation as strong biomarkers in early diagnostics of breast cancer in young women. The research was conducted in 20 patients, and involved 15 young females with breast cancer at stages T2-4N0-3MO (histologically confirmed). Cytogenetic tests of lymphocytes of females with breast cancer (BC) revealed chromosomal abnormalities expressing as deletions, iso-locus deletion of chromosomes and gaps. Activity of the DNA methyltransferase (DNA MTase) in BC is shown to rise up to 58%, in comparison with the normal indexes. Conclusion: Cytogenetic analysis of lymphocytes in BC women has revealed chromosomal abnormalities in the form of deletions, isolation of chromosome deletions and gaps. It has been shown that in BC, the activity of DNA methyltransferase is increased by 58%, compared with the normal indexes.
Keywords: Chromosomal aberrations, DNA methyltransferase, Breast cancer, Early diagnosis, Iso-locus deletion, Epigenetic control, DNA methylation, Histone modifications

Abstract
The aim of this study was to evaluate the frequency and severity as well as to define the best treatment option for patients with iatrogenic injuries. The article presents the analysis of surgical treatment of 49 patients with external biliary fistulas (EBFs) caused by iatrogenic injuries of anhepatic bile-ducts. The causes of strictures and external biliary fistulas formation were intra-operative injuries during cholecystectomy, gastric resection and echinococcectomy. Successful results were achieved in 43 (87.6%) cases using endoscopic transpapillary elimination of external biliary fistulas. Endoscopic manipulations promote the relief of clinical manifestations of CBD cicatrical stricture and provide the choice of the optimal reconstructive surgery.
Keywords: Hepatic Bile Ducts, External Biliary Fistula, Iatrogenic Injuries, Cicatrical Strictures, Diagnostics, Treatment.

Abstract
A modification of traditional fertility-sparing abdominal radical trachelectomy (ART) has been developed to reduce the opportunity for intra-operative injuries to occur through better management of the surgical field. The technique is similar to the standard abdominal radical trachelectomy. The ART modification developed by us enables to perform total or partial resection of the affected part of the uterine cervix after total mobilization of the cervix and excision of the upper and middle parts of the vagina. We have performed 204 modified fertility-sparing ARTs for CC women of reproductive age (27 to 37 years) at the early stage of the disease (T1A, T1B). On average the surgery lasted 140 ± 28.7 min, blood loss was 420 ± 50 ml. Epithelization of the uterine stump after surgery lasted 5 - 8 weeks. No intra-operative injuries of the nearby organs occurred. The follow-up period has lasted for 42 months. Oncological outcomes. No patient had CC recurrence and metastasis (till 42 months after the first surgery).
Keywords: Cervical Cancer, Squamous Cells, Dynamic Monitoring, Fertility-Sparing Surgery, Abdominal Radical Trachelectomy, Quality of Life