Diagnostic informativity of the volume MDCT-angiography and MR-cholangiography in the pre- and intraoperative periods for the examination of donors of a liver fragment.

Introduction. The first transplantation of a liver fragment from a living donor was performed in Uzbekistan on February 12, 2018 at the Republican Specialized Scientific Practical Medical Center of Surgery named after acad.V. Vakhidov. This event laid the foundation for a new direction for domestic clinical practice that meets the current level of world medicine development. Aim. The aim of the study was to determine the diagnostic information content of preoperative data of the volume multi detector computed tomography (MDCT) angiography and magnetic resonance cholangiography (MRCG) when compared with intraoperative ones at examining related donors for liver fragment transplantation (LFT). Methods. Total of 88 potential donors of a liver fragment aged from 19 to 58 years (53 men and 35 women) were examined for the period 2017-2019. Sixteen donors were undergone liver resection to obtain a transplant: the right lobe of the livers in 12 people and the left lobe in 4 people. Results. Compared with intraoperative data, the main arteries supplying the transplant planned for resection were identified with MDCT-angiography in 98.4% of cases (P<0.05). Variations of the portal bed according to MDCT-angiography in comparison with intraoperative ones were determined in 93.8% of cases (P<0.05). Intraoperatively revealed the main trunks of the venous outflow were determined by MDCT-angiography in 95.7% of cases (P<0.05). Recommendation. We suggest that MDCT angiography and MRCG is a highly informative and important method for estimation the condition of the liver in transplant planning.
Keywords: Liver transplant, Contrast agent, MDCT-angiography, Magnetic resonance cholangiography.

Aim. This review article mainly focuses on the importance, possible risks and state of public debate on genetic engineering particularly on genetically modified organisms (GMOs). During the last decade, tremendous progress has been made in the area of genetic engineering. The technology has numerous applications in increasing productivity of agriculture (in farm animal and plant species) and biomedical industries. Creation of resistant varieties of plants, transgenic animals, increasing the protein content, bio-fertilization, recombinant pharmaceuticals and gene therapy are now the major application of genetic engineering. Despite the technology has opened up new opportunities for highly specific manipulation of the genetic material of organisms, it has the possible risks of genetic contamination/inbreeding, competition with natural species, ecosystem damage, risk of horizontal gene transfer, new kinds of outbreak diseases; creation of drug resistant germs; accidental escape of laboratory strains and increased disease burden if the recipient organism is a pathogenic microorganism or virus. Additionally, now, scientists are faced with ethical issue challenges related to moral and religious acceptance and animal welfare. Conclusion. Scientists need to consider the types of applications of genetic engineering which will appear on the commercial market as well as develop procedures which will minimize potential biological and ecological hazards of the technology. Even though, genetically modified foods currently available on the international market have passed safety assessments, countries vary in their regulation of genetically modified foods indicating the necessity of worldwide consensus on labelling and traceability of genetically modified foods taking into account health and environmental risks as well as religious issues.
Keywords: Preterm Acceptance, Benefits, Biological and ecological hazards, Ethics, Farm animal, Genetically modified organisms (GMOs), Human health, Plant 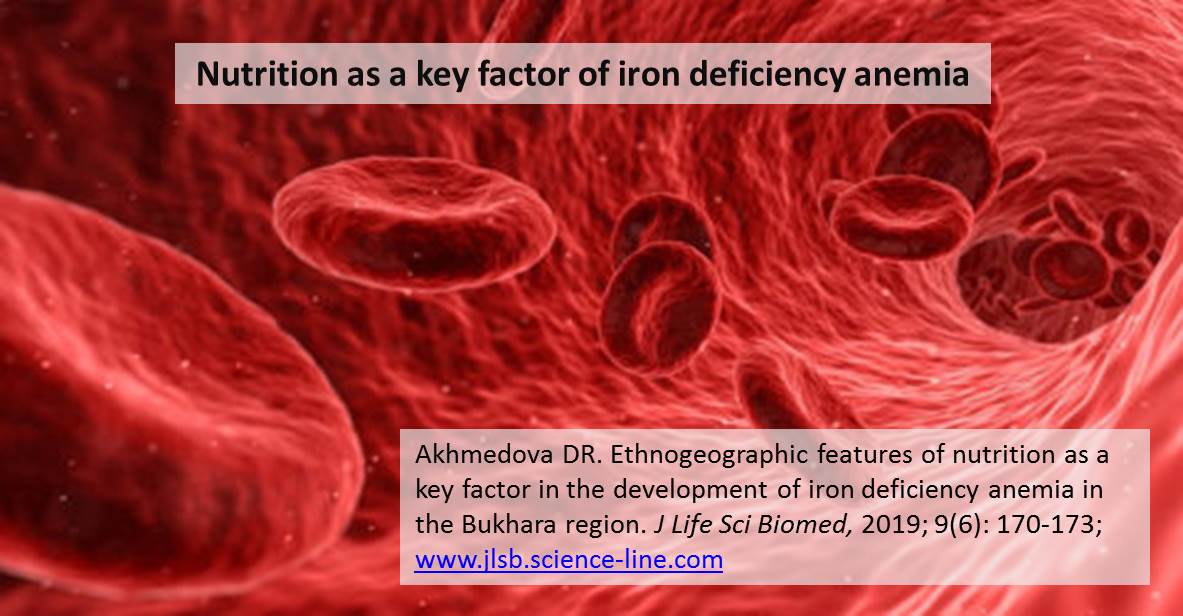 Ethnogeographic features of nutrition as a key factor in the development of iron deficiency anemia in the Bukhara region.

Introduction. Ecological disasters, industrial pollution, and poor nutrition lead to significant changes in the content of microelements (MEs) in food and, as a consequence, in the human body, while toxic MEs accumulate, displacing essential ones. Iron deficiency anemia refers to biogeochemical poly-microelementosis. For the prevention and treatment of iron deficiency anemia (IDA), drugs containing microelements are used along with traditional methods of treatment. Aim. This study aimed to investigate the nutritional characteristics and the ME content in the diet in order to clarify the etiology of IDA, the role of microelementosis in its development, and to also identify indicators of red blood parameters in families living in the Qorovulbozor district of the Bukhara region. Methods. Ten families were examined, each consisting of a husband, a wife, and female children. In order to facilitate the analysis of the results obtained, the husbands and wives selected for examination from those were aged between 30 and 45 with daughters from 12-17 years old. The content of MEs in erythrocytes and blood serum, in tap water, and in irrigation ditch (arch) water was determined. Results. A relatively favorable picture was observed only in men, while 1-3 degree IDA was observed with almost the same frequency in both mothers (75-78.5%) and their daughters (20-21.4%), respectively. Daily nutrition was roughly estimated by dividing the volume of food consumed per week into 7 days and the number of family members. Despite this, iron deficiency turned out to be significant for such products as meat, milk, bread, eggs, and fruit. This served as the basis for convincing the subjects of the need for proper nutrition and the administration of ME containing preparations (Vitrum Prenatal Forte). Conclusion. In order to exclude the entry of toxic MEs into the body, it is advisable to use mineral water for food, especially during pregnancy, instead of tap water. Our findings provide the basis for the need to correct the ME composition of the body with the necessary MEs, not only by increasing the volume and quality of food products, but also by using medications containing MEs.